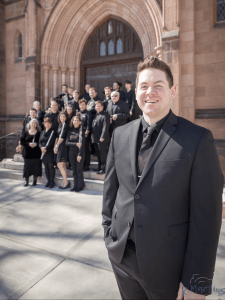 At Pittsburgh International Airport in 2014, Brian Messier was weighing job opportunities, one of which would mean a return to the Pioneer Valley. In order for the move to Massachusetts to become professionally realistic, Brian felt that he needed to create a quality wind ensemble that he would direct. From his previous tenure in the Pioneer Valley, Brian knew many talented professional musicians living and working in Western Massachusetts who lacked professional performance opportunities. The talent was there, he just needed to create the opportunity. Sitting at an airport cafe, he began sending texts to friends and colleagues.  By the time he boarded the plane, the Valley Winds was born.

With the recruitment of strong section leaders, Brian charged his colleagues with the task of building and assembling the finest musicians in the area to fill out the ensemble. Once the roster was assembled Brian invested his own money into getting the group off the ground. In the spirit of entrepreneurship, the musicians donated their time and rehearsed weekly at area high schools, borrowing percussion equipment and music from schools and colleagues. The first performance was presented on December 14, 2014 to an extremely enthusiastic audience and received the highest accolades they could imagine. The Valley Winds had arrived.

The Valley Winds continues its mission of providing the highest quality of both classic wind band repertoire and new works written for wind ensemble. Its members are professional musicians whose careers encompass everything from full-time performers,  music educators, college professors, private instructors, doctors, engineers, extremely talented college students and, of course, musicians who do a little of all the above.

We perform three concerts each season as well as the summer series “Orchestra in the Orchard” at Small Ones Farm in Amherst, MA. During its development years the Valley Winds performed at The Academy of Music in Northampton, Mount Holyoke College and in the communities of Belchertown, Greenfield, South Hadley and West Springfield. We are thrilled to announce that we plan to make our permanent home at The Academy of Music in Northampton, MA.

Dedicated to community outreach, the Valley Winds values opportunities to work with both high school and college musicians, as well as music educators.  The Valley Winds has shared the stage with musicians from the Youth Wind Ensemble of Springfield, West Springfield High School, Belchertown and Greenfield High School, and in their inaugural season, they ended the concert with a mass community performance of the Jacques Press’ Wedding Dance and the Berlioz Symphony for Band with over 100 musicians on stage.  In their third season, the ensemble offered a conducting workshop during the Massachusetts Music Educator’s conference open to any music educator in the district. In 2020 we introduced an annual Concerto Competition, the winner of which performs with the Valley Winds at the Academy of Music. The inaugural competition was open to high school musicians and we plan for future competitions to include college musicians.

Our future is very exciting. With the encouragement of grant awards and generous donors we are embarking on recording projects, commissions, and greater visibility in Western Massachusetts and beyond.  We look forward to growing our audience base and seeing you at our next concert.

We’ll let you know of upcoming performances. We won’t spam you (we hate that too), and you can unsubscribe any time.